NNEPRA is exploring relocating its Portland station to the mainline from its current Mountain Branch site. Executive Director Patricia Quinn briefed the TrainRiders/NE Board on this goal.

Relocating the station to the mainline would eliminate stop and reverse moves currently required for trains traveling between Portland, Freeport and Brunswick.

Sets the stage for increased passenger rail service and improved intermodal transit connectivity to and within the greater Portland region. 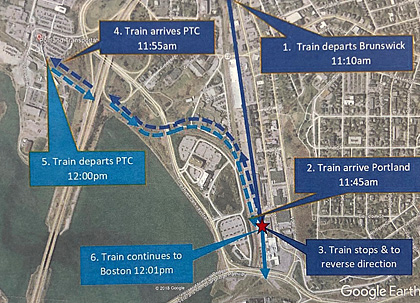 The existing station is located on a railroad branch line approximately one mile from the freight mainline. Southbound trains traveling from Brunswick/Freeport to Portland are required to make a reverse move in order to reach the station. A similar move in the opposite direction is required for northbound trains. These maneuvers add 10 minutes to the travel time between Brunswick and Portland and 15 minutes to the travel time between Brunswick and Boston. Relocating the station to the mainline will eliminate these extra moves, reduce travel time, increase Downeaster ridership and set the stage for service expansion.

The currently parking facilities (approximately 689 space plus and an overflow lot of 100-300 spaces) are constrained. A MaineDOT report projected that a total of 1,200 spaces would be needed to accommodate parking needs by 2023.

The current site is served by the METRO Bus but is not within walking distance of downtown or major employers and is perceived to be disconnected from Portland's Downtown/Old Port District. It is adjacent to Thompon's Point.

Significant improvements would need to be made to the existing site to meet the needs of the Downeaster and Concord Coach Lines:

The existing site, even if improved cannot support future growth of passenger rail and/or transit connections.

The TrainRiders/NE Board was impressed with NNEPRA's grasp of current challenges and future opportunities. Relocating the station to the mainline, thus eliminating the time-consuming backup moves, was unanimously supported by the board. Ms. Quinn is not one to rest on her laurels!