The 31st Annual Meeting was a Huge Success!

It was a grand meeting!!!

Among our invited guests were Patricia Quinn - Executive Director of NNEPRA, David Fink- President of Pan Am Railways and Bruce A. Van Note - Maine Commissioner of Transportation (Commissioner Van Note was unable to attend) and Maine Senator Susan Collins. Much is happening with passenger and freight rail in Maine and there was no better place to get a full briefing than at our Annual Meeting. In addition, we celebrated the Downeaster's 18th birthday!

Senator Susan Collins, chair of the Senate Subcommittee on Transportation, was unable to join us but appeared via video from Washington. She has been instrumental in increasing Amtrak's budget and has been a friend and constant supporter of TrainRiders/NE.

Over the years, our Maine delegation in Washington has regularly advanced the transportation needs of our state and made the Downeaster financially possible. We are indebted to their past and continued support.

We always look forward to Patricia Quinn's 'Downeaster Numbers.' As Executive Director of NNEPRA, she and her staff are responsible for the impressive growth of 'America's Favorite Train.' In addition, she outlined several projects that will keep the service growing. How was this year's Downeaster performance? Ms. Quinn had the answers.

This year's video was a combination of an earlier version with updated material. For many, it was the first time they saw TRN's battle against media skeptics and political opponents. 'Determination' was the keyword!

Not a member of TRN? Go here to join.

Register below so we'll have your name tag ready when you arrive. If you're registering for more than one person, simply refresh this page and enter the additional names and amounts. You can also renew your membership by going here.

You might call it a "busman's holiday" as a large group of Train Hosts traveled on the Downeaster to the Amtrak Dispatch Center at South Station in Boston. As part of their "learning experience," they used public transportation to travel from North Station to South Station, received a full briefing from Amtrak officials at the center (more than 700 trains are dispatched the center daily!) and enjoyed a relaxing lunch at Fanuiel Hall.

The video, narrated by Wayne, shows the all-day adventure.

The purpose of the TrainRiders Host Program is to have volunteers serve as goodwill ambassadors; to promote patronage of the Downeaster; to assist passengers with information onboard the train, along the route and at scheduled stops; to assist train crews in duties as requested by them, and to promote rail safety. This all-volunteer group of men and women enhances the Downeaster experience for the riding public.

Yes, you'll get to ride FREE to and from Boston while on duty. What's not to like about that?

Learn more about the program by going here.

On Friday, December 14th, TrainRiders/NE celebrated its 30th year of grassroots advocacy on behalf of passenger rail in the Northeast. Our pride and joy, the Amtrak Downeaster, marked its 17th year of serving Maine, New Hampshire and Massachusetts. 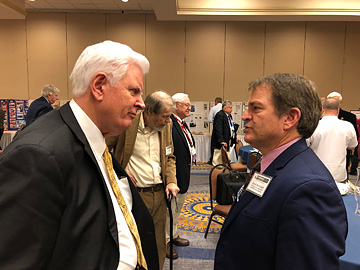 PRESS RELEASE: TrainRiders Northeast, the non-profit, volunteer, rail advocacy organization founded in 1989 announced today that it has hired its first ever Executive Director, George O’Keefe, Jr., of Winthrop.  O’Keefe is currently a Master’s Degree candidate in the Policy, Planning, and Management Program, with a concentration in Organizational Leadership and Management, at the Muskie School of Public Service.

O’Keefe will work alongside TrainRiders’ longtime Chairman and co-founder Wayne E. Davis to help the organization expand its mission of bringing “modern and efficient” passenger rail service to the Northeast. “A balanced transportation system is what we need in order to provide for sustainable economic opportunities that will last for generations,” said O’Keefe.