The 31st Annual Meeting was a Huge Success!

It was a grand meeting!!!

Among our invited guests were Patricia Quinn - Executive Director of NNEPRA, David Fink- President of Pan Am Railways and Bruce A. Van Note - Maine Commissioner of Transportation (Commissioner Van Note was unable to attend) and Maine Senator Susan Collins. Much is happening with passenger and freight rail in Maine and there was no better place to get a full briefing than at our Annual Meeting. In addition, we celebrated the Downeaster's 18th birthday!

Senator Susan Collins, chair of the Senate Subcommittee on Transportation, was unable to join us but appeared via video from Washington. She has been instrumental in increasing Amtrak's budget and has been a friend and constant supporter of TrainRiders/NE.

Over the years, our Maine delegation in Washington has regularly advanced the transportation needs of our state and made the Downeaster financially possible. We are indebted to their past and continued support.

We always look forward to Patricia Quinn's 'Downeaster Numbers.' As Executive Director of NNEPRA, she and her staff are responsible for the impressive growth of 'America's Favorite Train.' In addition, she outlined several projects that will keep the service growing. How was this year's Downeaster performance? Ms. Quinn had the answers.

This year's video was a combination of an earlier version with updated material. For many, it was the first time they saw TRN's battle against media skeptics and political opponents. 'Determination' was the keyword!

Not a member of TRN? Go here to join.

Again, these are proposals that NNEPRA is actively pursuing.

Unable to attend? Here's her presentation.

This was a well-organized gathering with color-coded dots for the attendees to express their passenger rail preferences. They gathered at tables...

NNEPRA is holding an Open House on Tuesday, October 22nd at 4:30 PM. Executive Director Patricia Quinn will brief on expansion proposals for the Downeaster. It will be held at 20 Mrytle Street in Portland. Input from attendees is encouraged. 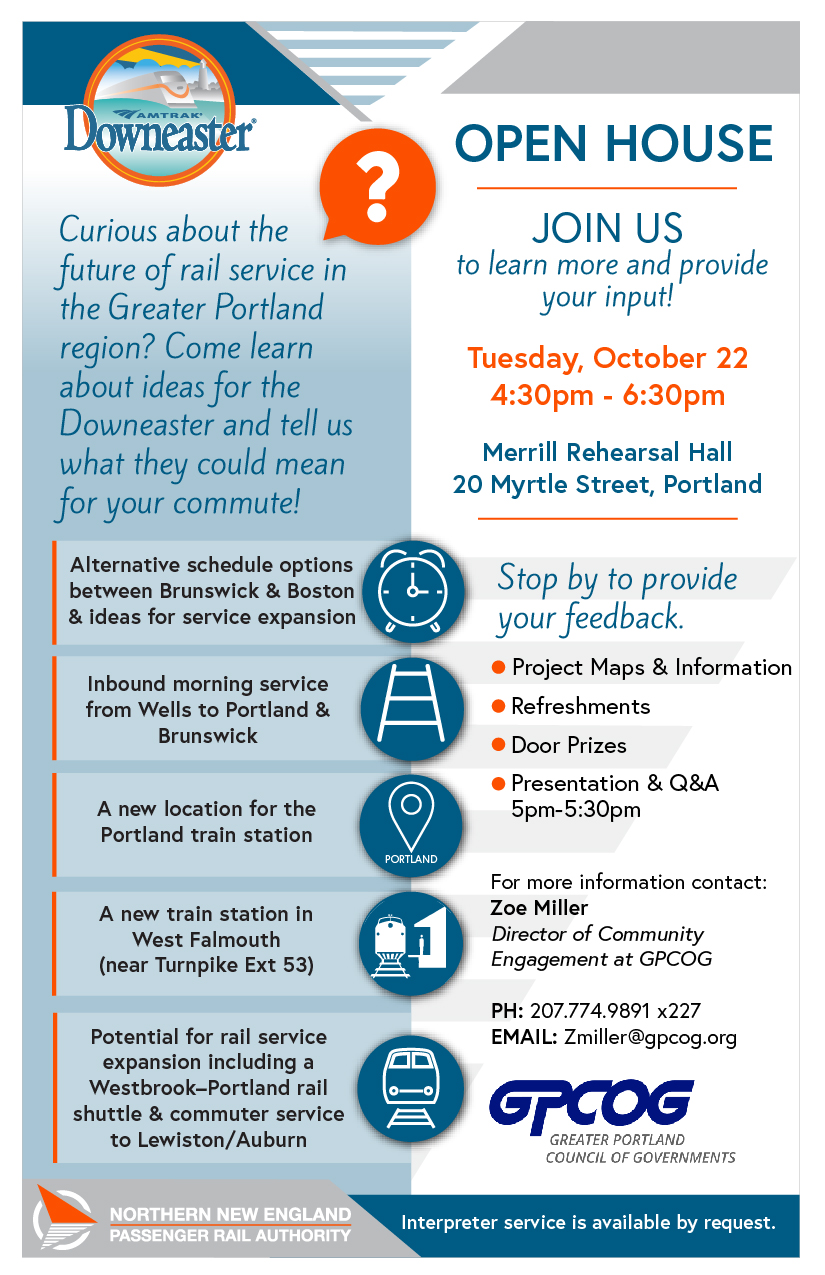 Improved????   I don’t think so.  One of the “improvements” starts off with “If you like traveling long distance via train but don’t want to actually meet other people while doing it, Amtrak has a new option for you”  Starting next month, Amtrak will add flexible dining options on four of its routes allowing passengers to take their dinners into their private rooms or have an attendant bring I to them”  Improvement?  New? 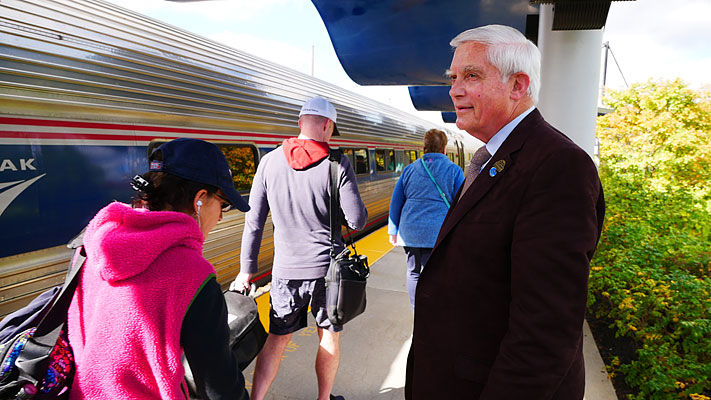 For the benefit of the new Amtrak folks – as a sleeping car passenger on countless Amtrak sleeping cars for the past 30 years, I’ve always had the option to have my meal brought to my room or walk to the diner and join with fellow passengers.  The American way.

It was quite a wait, but Amtrak finally ran a train from Brunswick to Rockland - part of the process of determining the quality of the state-owned railroad.

Photo by Stephen Betts of the Village Soup - Read the article

The Times-Record published an article. And there is a short video clip available on the Amtrak Downeaster Facebook page.

From NNEPRA: "The trip was conducted to evaluate the condition of the track and to help determine scheduled travel times as well as any improvements which may be needed to support the operation of passenger trains. In addition to visual inspections, a specially equipped Geometry Car operated over the line to collect detailed data about track conditions."

Now it's a matter of converting the Geometry Car data into dollars & cents needed for any required improvements. NNEPRA Executive Director Patricia Quinn told her board this week that she was encouraged by the test and was looking forward to starting the Coastal Connection to Rockland next year. We're all rooting for the expanded summer service.