Preliminary Report FY2016: The numbers showed continued recovery of the Downeaster service from the botched tie-job of FY 2015 and part of FY2016.

On Time Performance: I'll pick last year's worst OTP month - May of 2015 was 0% This May it was 81% - not the 90ish NNEPRA is aiming for, but a spectacular return to normalcy.

Overall Customer Satisfaction - June, 2016: The Downeaster continued to eclipse Amtrak service elsewhere with a 92% rating as opposed to Amtrak's 86%.

Fall Tie Replacement: There remains considerable track work to be done this Fall. From October 1st to November 21st, some 15,000 ties will be replaced between Portland and Wells. This will necessitate no Downeaster service between Brunswick and Wells. Special bus service will bring southbound passengers from Brunswick, Freeport, Portland and Saco down to Wells. Similar service will transport northbound passengers after they reach Wells on the Downeaster. Another painful reminder that maintaining the tracks keeps railroad service up to expectations.

Maine’s Government Oversight Committee (GOC) met today in Augusta and heard Beth Ashcroft, director of the Office of Program Evaluation and Government Accountability (OPEGA), present a 7-page report detailing her agency's preliminary investigation of NNEPRA. This investigation was initiated at the request of Sen. Stan Gerzofsky (D. Brunswick), who, among other things, opposed NNEPRA’s choice for the site of the soon-to-be-completed layover facility in Brunswick and who accused that Authority of mismanagement and a lack of transparency.

After extensive research into the operations and governance of the rail authority, Ms. Ashcroft stated that OPEGA found no significant issues with NNEPRA.  More specifically, the report stated that:

OPEGA noted that NNEPRA “appears to have strong practices in some areas, like procurement and contracting, which are already reviewed to some degree through . . . federal reviews and independent financial audits.”  OPEGA’s conclusion that “there may be limited value to spending OPEGA resources on more detailed review of NNEPRA at this time” is a strong endorsement of NNEPRA’s practices and activities, validating the value of that agency to the State of Maine and the rest of northern New England.

OPEGA's 7-page report will be followed by a more detailed Information Brief in September, after which the GOC will consider whether any follow up is needed. A copy of the report is available at http://legislature.maine.gov/uploads/originals/final-nnepra-project-direction-recommendation-statement-.pdf. 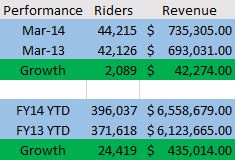 Ms. Patricia Quinn, NNEPRA Executive Director, presented Downeaster performance statistics for the third quarter of FY2014 - they were all on the plus side (graphic to come). Ridership was up as compared to FY2013 as was revenue. Six percent growth is to be celebrated in this current sluggish economy.

On Time Performance rose to 81.3%, which is an improvement of previous reporting periods.

How do your define 'conflict of interest?' The Portland Press Herald reports that the West Brunswick engineer who determined that the proposed Downeaster Layover Facility would exceed federal noise regulations, quietly filed plans to build a 9-home subdivision next to the land. That's a clear financial 'conflict of interest.' Or, to put it another way, "Not in my backyard unless it's my subdivision." Read the Press Herald's reporting.

A letter from Governor Paul LePage to the Federal Railroad Administration (FRA) became public this week requesting a "significant and thorough review" of the planned train Layover Facility that would be constructed in the existing property zoned 'rail yard' in West Brunswick.